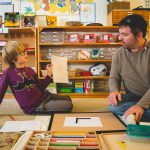 Transitions: Coming to Heartwood From a Traditional School Environment

Transitioning into or out of a school can sometimes feel scary for parents and children alike, especially when they aren’t sure what to expect. We reached out to our community of families to get a feel for what that process was like for them, whether they were coming to Heartwood for the first time or transitioning into a traditional school environment after being immersed in the Montessori world. Our hope is that by sharing these experiences... Read More 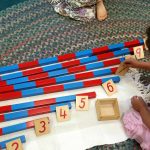 The Benefits of Montessori Kindergarten

If you have a child getting ready to enter kindergarten, you are probably asking yourself the same question that thousands of Montessori parents ask themselves every year. Should you allow your child to continue in a Children’s House for the third year (kindergarten) or should you enroll them in a more traditional public school program? Many families grapple with this question and although there are many factors to consider, cost is usually pretty high on everyone’s list. Why pay for kindergarten when you can... Read More 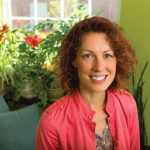 Identifying and Reducing Anxiety in Children

During our December PAG meeting, Dr. Kristen Wynns presented a talk on Identifying and Reducing Anxiety in Children. She opened the talk by sharing her credentials, joking that she was doubly qualified on the topic as she was not only a psychologist but also a parent herself. She has two girls (ages 13 and 10). The first focus of our conversation was on determining whether a child was suffering from anxiety. Although it may be... Read More 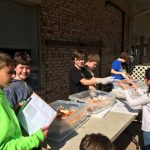 The UE Pizza Business Co-written by Samantha Chase and Ainsley Rutherford Every Wednesday pizza is delivered to students in multiple classes. At Heartwood Montessori everyone loves pizza, but how does the business really work? Blog editor Samantha Chase provided questions to sixth-grader Ainsley Rutherford, who answers them below.   Who runs the pizza business? The pizza business is run by the upper elementary (UE) class. Both teachers and students participate in running the business.  ... Read More 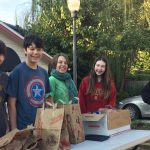 During class one morning, after Hurricane Matthew had caused unbelievable damage to our eastern North Carolina neighbors, the high school class decided that the best way they could help out would be to have a Hurricane Relief Drive. The class decided on a Thursday that they should do it the very next day. They composed an email that was sent out to the Heartwood Community and collected donations during morning carpool. The response was amazing!... Read More 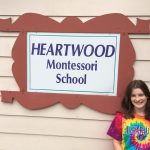 Amber had only been at Heartwood for a short time when it began to feel like home. Inspired by the Phillip Phillips song, Home, she decided to create a video to capture her feelings of belonging in a form she could share with her classmates.  Over the course of just a couple of days and using her cell phone, Amber created a beautiful video highlighting what it means to be a part of the Heartwood... Read More 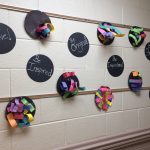 Inspiring Art Through “The Dot” by Peter H. Reynolds

As the daughter of a librarian, Ms. Courtney often finds inspiration for her lessons through books. “The Dot” by Peter H. Reynolds was the focus of her first art lesson of the school year. Her mother sent the book to her as a gift and she felt compelled to share it with her students. “The Dot” is about a little girl named Vashti who believes that she is hopeless as an artist. But, through the ingenuity... Read More 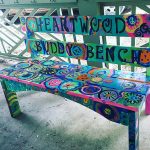 Last year a video about Willowgrove School made it’s way from Saskatoon, Saskatchewan in Canada all the way to our very own Heartwood Montessori Families Facebook page. The piece, originally aired by the CBC (Canadian Broadcasting Corporation), told the story of a Buddy Bench that had been installed on the school’s playground. The intention of the bench was to provide a place for children to go when they were lonely and didn’t know who to... Read More